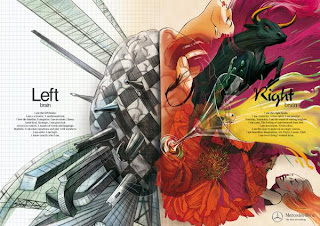 The "theory" of left/right brain dominance originated from the work of Roger W. Sperry. In order to reduce or eliminate seizures, epileptic patients had their corpus collosum severed (the structure that connects both hemispheres of the brain). As a result, his patients experienced a sort of "split mind", where they were able to name objects presented to the left side of the brain, but unable to identify objects presented to the right side of the brain. He concluded that the left side of the brain is responsible for language.
From this research evolved the pop psychology phenomenon of left/right brain dominance "theory". I say "theory" because it is not supported by empiricism, nor has it ever been seriously considered by neurologists as having any empirical weight. While the left side of the brain houses much of the areas responsible for language, and the right side of the brain houses much of the areas responsible for advanced visual processing, it is not as simple as that.
The "theory" assumes that each side of the brain controls different thinking styles, and that one side is always dominant in individuals. So everyone can be classed as predominantly "left-brained" - logical, analytical, and objective, or "right-brained" - intuitive, thoughtful, and subjective. This “theory” is not to be confused with hemispheric dominance relating to “handedness” or “footedness” etc. which does have empirical legitimacy.
Empirical research has suggested that the way the brain functions is not nearly as dichotomous as this "theory" assumes. The left hemisphere of the brain is not exclusively logical, analytical, and objective, and the right hemisphere is not exclusively intuitive, thoughtful, and subjective. In reality, both sides of the brain contribute to some extent to most functions. For example, it is shown that we are best at solving maths problems when both hemispheres work together. And there are parts of our right hemispheres that assist with our left hemisphere in processing language.
Traits do not cluster in the way that left/right brain dominance theory would predict. People are not exclusively analytical or thoughtful, objective or creative. The majority of people have a relatively even mixture of the these traits. I would encourage you to think of a bell curve, but that assumes these traits lie on a continuum with for example language skills (associated with the analytical "left brain") on one end and visual skills (associated with the creative "right-brain") on the other, when in reality language can be used creatively, and visual skills can be used analytically. In short, the "theory" or "left/right-brain" dominance is a massive over-simplification.
Assuming that either hemisphere of the brain can be "dominant" in an individual with regards to personality (considering that the frontal lobe of both hemispheres is primarily responsible for personality) is quite absurd. It is one particular aspect of pop psychology that just won't seem to go away. It is a product of the naive misinterpretations of real neurological findings that have been perpetuated and perverted for decades, and has gained a recent revival thanks to how easily the internet allows us to spread uninformed bullshit. It is up there with "did you know we only use 10% of our brains?" It has made its way into the collective consciousness of the public at large as a factoid - something that is repeated so often, it is assumed to be true.
Posted by Jessica at 12:34